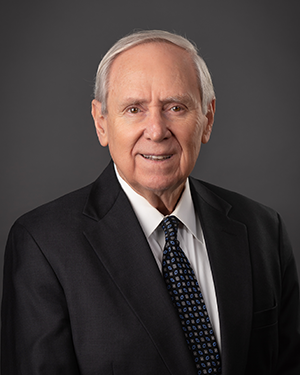 Dick is recognized nationally as a preeminent trial lawyer. He is a co-founder of Boyle Brasher LLC. Before that firm was formed, he was a partner of Gundlach, Lee, Eggmann, Boyle & Roessler, a successor of the firm he joined after graduating law school from the University of Illinois College of Law.  Dick has tried over 100 jury cases to verdict and tried many more resulting in settlement or dismissal during trial. He  successfully handled numerous appeals in the Illinois Supreme Court, Illinois Appellate Courts, and the U.S. Circuit Court of Appeals for the Seventh Circuit for  many national and international companies. He is a nationally recognized practitioner in the areas of railroad law and products liability law. He was deeply involved in tobacco and asbestos litigation as well as high profile airplane and legal malpractice litigation. Among his colleagues and with his clients he is known for his unparalleled work ethic and meticulous case preparation and presentation.

Dick is a Fellow of the American College of Trial Lawyers and a Diplomat of the American Board of Trial Advocates. In addition, he is recognized by other peer selected entities such as “Best Lawyers in America” and “Super Lawyers.” He is a Past President of the National Association of Railroad Trial Counsel and served as chairman  of committees of that association.

Dick served in the U.S. Air Force Reserves in an air medical evacuation unit. After  his family and firm, Dick reserves high loyalty to all things related to his alma mater, the University of Illinois and its Fighting Illini. Dick and his wife, Janet, live in Belleville, Illinois.

Plaintiff v. Aircraft Manufacturer. United Stated District Court for the Central District of Illinois. Products Liability. Mr. Boyle defended an aircraft manufacturer in a products liability jury trial in a lawsuit brought for the death of the pilot and his four children. A verdict was returned for Mr. Boyle’s client.

Plaintiff v. Physician. Circuit Court of St. Clair County, Illinois. Medical Malpractice. Mr. Boyle obtained a jury verdict in favor of an ophthalmologist in a medical malpractice suit that involved an unsuccessful cataract operation resulting in blindness in one eye.

Plaintiff v. Manufacturer. United States District Court for the Southern District of Illinois. Mr. Boyle successfully defended a chemical manufacturer in a suit by a plaintiff who lost both of his eyes.

Plaintiff v. Railroad. Illinois Supreme Court. FELA. Plaintiff,  a railroad employee sued his employer in a FELA case in the Circuit Court of Madison County, Illinois when the defendant did not conduct its usual and customary business activities in Madison County. Mr. Boyle argued that the case should be transferred to another Circuit Court, but the trial court denied the motion. The case was appealed to the Illinois Supreme Court, and Mr. Boyle briefed and argued the case on behalf of the railroad. The Illinois Supreme Court issued an opinion in support of the position taken by Mr. Boyle’s client and ruled that “doing business” in Illinois is a more stringent standard for venue than for jurisdiction. This ruling remains a case of major precedential value in Illinois courts with regards to whether a venue is appropriate.

Insurance Company Declaratory Judgment on Coverage Issue. In the Appellate Court for the Fifth District of Illinois. Mr. Boyle obtained a reversal of the trial court’s order and obtained summary judgment for the insurance company that no liability coverage was afforded by the policy.

Plaintiff v. Railroad. Circuit Court of Rock Island County, Illinois. After a week of trial, the jury returned a verdict of no liability of the railroad in a railroad crossing death case.

Multiple office locations to serve you!